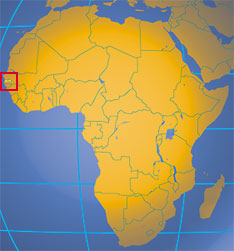 The Gambia, a republic within the Commonwealth of Nations, situated on the western coast of Africa, enclosed on the north, east, and south by Senegal, and fronting the Atlantic Ocean on the west. Also called Gambia, it has an area of 11,295 sq km (4,361 sq mi). Banjul is the capital.

The Government of The Gambia is strongly committed to private sector empowerment and the creation of an enabling environment to stimulate private investment in the country.

These we are doing through the combined use of sound macro-economic and financial programs on the one hand, and complementary social sector interventions on the other, all with a view to ensure more confidence in the economy and The Gambia as a safe haven for investment.

The Gambia River is navigable for about 190 km (about 120 mi) from the Atlantic Ocean by small oceangoing vessels. There are 2,700 km (1,678 mi) of roads; the construction of a major road south of the river has reduced the importance of the river as a major artery of transportation. The country has no railroads. An international airport is located at Yundum, near Banjul.

Broadcasters include government-operated Radio Gambia and commercial stations such as West Coast Radio.

Land and Resources of The Gambia

The Gambia extends for about 320 km (200 mi) inland from the Atlantic Ocean on both sides of the lower Gambia River.

It is only about 50 km (30 mi) wide at its widest point. The river is lined with mangrove swamps.

Climate of The Gambia

The Gambia has a subtropical climate with distinct hot and cool seasons. During the cool season, from November to May, the harmattan, a hot, dry, dusty wind, blows from the Sahara. Temperatures range from 16°C (60°F) in winter to 43°C (110°F) in summer.

The rainy season lasts from June to October. The average annual rainfall is about 1,020 mm (about 40 in).

Natural Resources of The Gambia

The main natural resource of The Gambia is the Gambia River, one of Africa’s best navigable waterways. The country’s soil is mostly poor and sandy, except in the riverine swamps, but is ideally suited for the cultivation of peanuts, upon which the economy depends. Fish are increasing in economic importance, and seismic surveys have indicated the possibility that petroleum exists.

Plants and Animals of The Gambia

In The Gambia, the mangrove, oil palm, and rubber vine grow in profusion, and cedar and mahogany trees abound. Wildlife includes leopard, wild boar, crocodile, hippopotamus, and several species of antelope. Such game birds as the guinea fowl and sand grouse are plentiful.

Environmental Issues in The Gambia

The Gambia has lost 91 percent of its original forest habitat, which has been cleared for agriculture and fuelwood. As a result, many of the big-game animals have been destroyed, although some protected areas have been established. With government incentives encouraging growth in the number of fishing companies, overfishing has emerged as a problem.

Population of The Gambia

A wide variety of ethnic groups live side by side in The Gambia while preserving individual languages and traditions. The population comprises the Mandinka (also known as Mandingo or Malinke), the largest ethnic group (representing about 42 percent of Gambia’s inhabitants); the Fulani (about 18 percent), who predominate in the eastern part of the country; the Wolof (about 16 percent), who live mainly in Banjul and the western region; the Jola (about 10 percent), who live in the western region; the Serahuli (about 9 percent), whose rulers introduced Islam into the region in the 12th century and who are primarily traders and nomads; and the small Aku community, partly descended from liberated slaves. In 2000, 32 percent of the population lived in urban areas.

Population Characteristics in The Gambia

The population of The Gambia (2002 estimate) is 1,455,842, making it one of the least populous countries of Africa. Still, the country has an overall population density of 129 persons per sq km (334 per sq mi), and the population is increasing at a rate of 3.1 percent a year. Banjul, formerly called Bathurst, is the capital and only seaport. The largest city is Serrekunda.

Religion and Language in The Gambia

About 90 percent of the people of The Gambia are Muslim; 9 percent are Christian; and 1 percent follow traditional religions. English is the official language, but each ethnic group has its own language.

Education in The Gambia

Primary education in The Gambia is free but not compulsory.

The country’s institutions of higher education include The Gambia College, in Bríkama, and several technical and training schools.

Agriculture and Fishing in The Gambia

Some 82 percent of the working population of The Gambia is engaged in agriculture. Rice and millet, as well as cattle, sheep, goats, and poultry, are raised for local consumption.

The sale of peanuts and peanut products accounted for about three-quarters of total yearly domestic exports by value in the 1990s.

The government has introduced the raising of cotton, sisal, citrus fruits, and tobacco to diversify agricultural production. The coastal villages engage in fishing.

Manufacturing, Currency, and Trade in The Gambia

Manufacturing in The Gambia is limited mainly to the processing of peanuts and other primary products and to the building of fishing boats.

Other manufactures include beverages, clothing, footwear, and handicrafts. The country’s unit of currency, adopted in 1971, is the dalasi (12.79 dalasi equal U.S.$1; 2000 average), consisting of 100 butut; it is issued by the Central Bank of The Gambia (1971).

The cost of The Gambia’s yearly imports is usually much more than its export earnings; in 2000 imports totaled $210 million and exports were valued at $9 million.

The Gambia’s tourist industry is a growing source of foreign exchange; the country hosted 91,000 visitors in 1998.